While some people find it a breeze, I have always found writing dialogue difficult. If you are in this same boat, there are things you can do to build this skill.

First, some resources – there are plenty of books, articles and blogs that can give you any number of tips for writing strong dialogue. Here are a few: 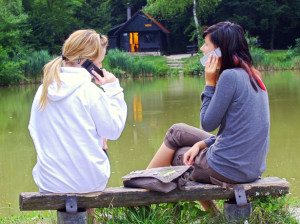 Writing dialogue was always something I avoided, it just didn’t feel authentic or convincing when I wrote it. That was ok, I thought, I wrote emotively, poetically, and found ways around dialogue, using only the most minimal lines of speech, just to have some kind of discourse rather than it actually being relevant, or good for that matter. But I knew I was mostly avoiding it. So I tried writing actual conversations. Years ago, with the consent of those concerned, I started writing snippets of conversations. This was useful in as much as I selected the bits I wanted to record, but not so useful in that I still wasn’t getting a sense of real conversation versus written dialogue. Plus, handwriting only allowed me to capture snippets…while I madly scrawled to keep up, I felt like an observer rather than a participant. I found I missed lots of ‘gold’ and tried to fill in gaps from memory. I remember a road trip with my cousin and my son where my cousin told the best, funniest stories while I tried to capture them all in writing through my laughter.

Here’s one of those conversations:

Cousin: I have to tell you about the tram.

Shel: Is this going to be a good story?

Cousin: (laughs) Well, there was this dude.

Son: Yeah, this is going to be good.

Cousin: He was young, like about 18 and he was, how to say this, eccentric. He obviously didn’t have a good time at high school and you could tell in his demeanour. He was the kind of guy who would trail a cape behind him, like he thought he was a vampire or something. You know what I mean though? (She gestures to indicate the cape)

Cousin: Well, he shimmied up the tram and grabbed a pole and kind of swung himself into a seat then flung his writing book on the seat beside him.

Son: How did you know it was a writing book?

Cousin: It was one of those, what are they, those books that writer’s think are really cool?

Shel: Moleskins? (how do I know this, I have one myself!!)

Cousin: Yes, a moleskin. Then he just kind of slumped. Then he picked up his book and leaned across the aisle and leant over and just stared at another passenger and wrote something in his book. (she demonstrated on my son)

Cousin: I know. Then he got up as the tram was stopping and it kind of jolted so rather than looked totally bizarre…

Cousin: Right. So he swings himself out the door and lands with his arms up and kind of spread-eagle and he looks one way, then the other and off drives the tram. (she raises her arms, looks this way and that – demonstrating the guy’s motions)

Cousin: I know. And I laugh and a man on the tram says, ‘What was that?’ And I said, ‘I don’t know, but I was completely enthralled.’

This was ‘gold’ to me. A character waiting to be written!

In the end, I resorted to using a small recorder and, again with consent, I recorded several conversations and transcribed these word for word. You should try this yourself if you have never done so – it is quite a revelation to see how terrible actual conversations are for a direct transfer to written dialogue! (You could also transcribe dialogue from movies to see how this compares to discourse in real life.)

Here’s a snippet of conversation I recorded in the car between myself and two of my friends on our way to a weekend away:

C- looking in her bag.

S- What are you looking for?

S- Your specs? You really are a grandma. We’ll call you Ohmar.

S- you need your ears checked too.

J- laughing at my very Australian pronunciation. You say orma, not ohmar.

J- How was the weather last night. Did you get really bad weather in the middle of the night?

S- Yeah, it poured down.

C- I thought any minute I’m going to hear the basketball hoop fall onto the car.

C- I got up early this morning and did it.

S- I was excited. When I went to bed I had to read cos I couldn’t sleep.

Nothing ground breaking here, but it was a fun drive. Hilarious even, with lots of laughter. Mostly it was fast paced and witty, with each of us interrupting the other, each speaking louder and louder to be heard over the others, each trying to outwit the other. You just don’t get that from this recorded dialogue. Admittedly, I wished I’d recorded our conversation later that night, when we were convinced the newly deceased Oma had come to the hotel room for a visit. Talk about laugh until your sides split! 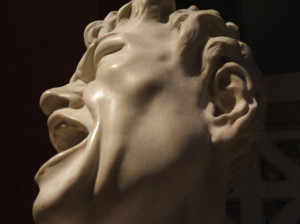 In The Novel-Writer’s Toolkit, Caroline Taggart points out that, “…there is a vast difference between real dialogue and realistic dialogue. Most of us talk a lot about mundane subjects such as the weather and supermarket prices…Also, most of us punctuate our speech with ums, ers and you knows – all of which become very boring if you copy them out word for word.”

What this kind of activity does give you, however, is a sense of how speech flows. Conducting and recording interviews for profile pieces and biographies also taught me a lot about speech, though this kind of dialogue can be very interviewer driven.

Many writing coaches and ‘how to’ books recommend this kind of activity, and perhaps someone had suggested it to me – though I remember reading that Australian journalist/author, Helen Garner had kept journals and recorded conversations, and at the time I thought that sounded like something I should try.

In A Novel in a Year, Louise Doughty says by doing this, “You will see straightaway how infrequently real speech comes in full sentences, how little it makes grammatical sense even when the meaning is clear. People change subject mid-thought or leave thoughts half finished. They interrupt each other or themselves.”

In my novel, I try imagining my characters speaking to me, and imagining I am the character having a conversation with one of my friends. This has helped me create more authentic written discourse.