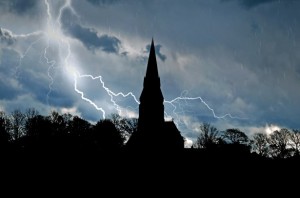 I lie awake in my lightening-lit room. A sense of electrified urgency, caught in gusts, forces its way in gaps in the window. A wisp works its way beneath the blanket as though someone is blowing on the nape of my neck. I press my cheek deep into the comfort of the pillow; the pounding of my heart mimicking the great thunder claps that ceaselessly beat the skies. I cannot sleep. The storm builds, grey clouds of horror smother the earth in a war of rain and lightning and thunder. The river is frenzied with a torrent of waters, barely heard above the storm. I am afraid we’ll all die from the evil raging amongst the storm.

I gather my blanket around me and gaze out of the window. On nights like this, the village is a dark place, lit up now and then in a blaze of light that has me jumping at my own shadow and pulling the blanket tighter around my shoulders.

I think of Marketa, who had been my friend, who had betrayed my trust. I think of the look on her face when I caught her with Zikmund. I think she could have been brave enough to tell come to me, to tell me first before falling into his arms.

She told me she loved him.

“He’s using you,” I had said and there was hurt in her eyes.

“No Annabella, you are wrong. He loves me.”

“Does he ask after me? Does he question what I do, where I go? Is he more interested in me than what your day consisted of?” I’m angry now. It all seems clear, that bolt of lightning moment. He had never been interested in me, rather he was interested in what he thought I was, interested in promoting himself at my expense.

She hestiated then, a momentary look of confusion gave way to spite. “Don’t flatter yourself! You’re just jealous that he has chosen me over you.” Marketa spat back at me.

I wasn’t angry with her, he was a very attractive guy and knew how to win a girl over, I should know, I’d been fooled by him. “You’re wrong, Marketa. You think he is great now, but he is nasty at heart. It will only end badly.” I knew she couldn’t see I was just trying to be help, that I was concerned for her.

I am brought back to my darkened room by the screaming of a rain drenched raven. The great bird, illuminated against the electric sky, soars in sodden effort up past the cloak bridge and then arches around the dark expanse of the river below.I shiver, close the shutters, draw the heavy curtain and return to bed.

I was asleep when she died. Marketa, with her sunken eyes closed.

What do you think? I’m not sure this is as effective as I had hoped: the violent storm reflecting the argument with Marketa and acting as an omen for her death. It DEFINITELY needs work – but the idea is there.