In November 2017, I did The Bloody Long Walk in Sydney – a 35km charity walk for mitochondrial disease from Palm Beach down to Manly. I’ve never participated in a charity walk, but a friend invited me as good training (I plan on doing the Camino de Santiago later this year). I had never done a 35km walk before, and so began training. 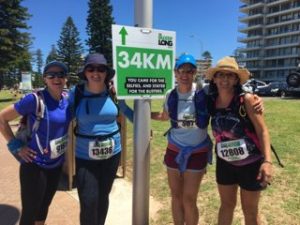 I have been plagued by Achilles Tendonitis for some time. Working with a physio for about five months has greatly improved things – previously, I would never have considered walking such distance as a possibility. By now I knew that training had to be regular and slowly incremental, so I set myself a schedule that gradually built up to the walking distance. By the day of the walk, I had already walked 30km, but still not a 35km walk, and still very little elevation training – I had run out of time!

The walk itself would have been tough enough – a lot of up and down hills that I felt under-prepared for, but it was even tougher because we (myself and 3 other women) set a cracking pace. Our start time was 6.20am – though there were several staggered starts so I’m not sure exactly what time we actually started walking. I think we finished around 2pm. We were aiming to walk 5km/hour – which is what I usually walk on flat ground – but we walked much faster than that. Factor in that we had to queue for toilets, water and sunscreen along the way, plus being slowed considerably in sections where paths narrowed causing bottlenecks. The faster pace pushed me more than I had previously pushed myself. Added to this, the course was very hilly and there were sections that were up and down uneven rocky ‘steps’, as well as a few small beach/sand sections. It certainly put me through my paces.

From about 5km in, I was not sure I would make the 35km walk…until I finally staggered over the finish line! This walk took mega amounts of concentration and positive self-talk to keep myself there, to keep myself together, to not break down in a crying, blubbering mess of pain and tears and sweat and snot. This was the toughest walk I have done to date! My ankles were sore throughout, though the flat was certainly easier compared to everything else. The uphills felt toughest to begin with, but by the end I think it was the downhills that were hardest. My ankles hurt throughout the whole walk, and then my right knee started hurting…but I figured we were all hurting in our own way – how can you not when you walk 35km! I had even taken some Panadeine Forte along the way!

When we finally made it to the finish line, it was all I could do not to burst into tears and fall to the ground…instead, I donned the appropriate cheerfulness and staggered with my team across the road for celebratory burgers! Did the rest of my team feel cheerful? Was I the only one who felt like a physical and emotional mess? I was in so much pain, I was so exhausted, I felt barely comprehensible.

Afterwards, I iced my ankles for 20 minutes, I showered then napped. The ice really helped my ankles recover, but despite this, they were swollen the next day and I used Voltarin gel – which helped a little. Of course, my calves and quads, and my glutes to a lesser extent, were sore afterwards – to be expected I think! That day, I a full body massage – blissful.

Two days after the event – I woke up sorer than previously. I think day two is the more painful recovery day. I went for a small walk and a swim – well more like a float in the pool rather than actual swimming.

Overall, I was pretty impressed that I finished that 35km walk, especially given how hilly the course was and how fast we walked. Despite this being a huge achievement, I would not choose to do it again…it felt like a bit of a stretch too far for me…perhaps with more training beforehand, perhaps if we had walked slower, perhaps if my Achilles was more resolved…perhaps…