This week I continue research 18th century medicines and herbal remedies. It’s fascinating actually – gruesome and bizarre! Given the protagonist of my historical fiction, Annabella, is a healer, I need to develop a working knowledge of herbs to build accuracy and authenticity. Annabella is treating a princess (historical figure who died of a ‘mystery’ illness). Of course today, doctors could diagnose the princess’ illness; at the time however, her symptoms had the villagers gossiping – pale skin, an aversion to sunlight, reddened urine…not surprising then that the villagers thought her a vampire. And you know how gossip grows and spreads.

I am also interested in the interaction between doctors and healers in the 18th century. I think there is a tension to be built here – so of course some knowledge of medicine will be required too. 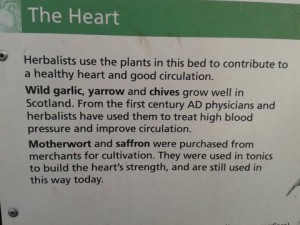 I have become a collector of historical information. When I was travelling late last year, I came across a garden set out in the formal style of the era that contained medicinal herbs. I imagine some of these in the garden of Adela, my protagonist’s grandmother. I took photos of all the information boards in that garden!

I am considering what sort of healer Annabella is, and indeed, what sort of healer her grandmother was before her. I know that Adela was a midwife and that she supplied the villagers with charms and potions, but that she could not set bones, or deal with serious injuries beyond trying to stop bleeding and doing some rudimentary stitching. She may have been a doctor’s wife, acting as nurse and assistant to him. (Her husband’s occupation is a background issue, but I think it is worth considering to some degree…perhaps). Adela was famed for her elixir of health – a general tonic that was prescribed for all kinds of ailments. This was the kind of thing travelling quacks might have sold. She was also known to the princess and advised her on matters of fertility and provided her with an elixir of youth.

Annabella takes over from Adela in terms of the princess’ health and in preparing the elixir of youth.  But Annabella also becomes known to villagers as a witch – I want to explore why this is, to build a case for their beliefs while having these beliefs founded in ignorance and gossip rather than fact.

Annabella’s practice was based on her knowledge of herbs – passed down through generations of her family, and with much trial, error and experimentation. She does not blindly follow the common practices of the day and is critical of what she sees as medical malpractice of doctors. She is questioning and curious – not aspects that were thought appropriate in an 18th century maid. 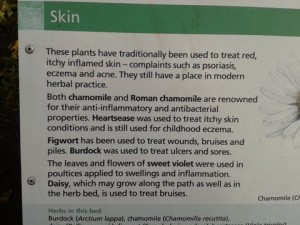 The practice of bleeding was common. Tincture of rhubarb or syrup of violets were used as laxatives. Calves’ foot jelly, thought to be restorative, was served to the ill. Vaccination of illnesses such as smallpox began. This disease reached epidemic proportions across Europe – good to know as there are several deceased people referred to in the novel. Syrup of violets was also thought to be an anti-inflammatory. Mustard seeds boiled in milk was used as an anti-inflammatory for rheumatism. 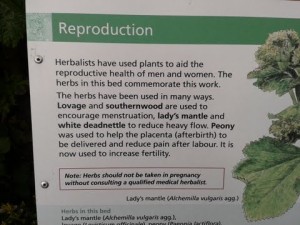 Herbal contraception came from silphium, asafetida, opoponax, myrrh, date palm, pomegranate, pennyroyal, artemisia, willow and rue. Contraceptive teas could be made of marjoram, thyme or parsley. Contraceptive and abortive teas were made from lavender, root of wormfern and brake (also known as the prostitutes’ herb). Cedar oil, cabbage leaves and mandrake could make contraceptive vaginal suppositories. And then there were rituals for contraception or to bring/attract a mate: knotting of the cords.

If you were having a hard time with the neighbours, you could use eggs, herbal drinks, baths, fumigations, packets or ointments, apples or bread to remove disharmony.

Amongst the weird, there are some things that haven’t changed – lemon, honey and rum drinks were used for colds and sore throats.

There is also great inspiration to be found from the names of things:

Bugbane, an anti-inflammartory, was also known as snakeroot. Syrup of maidenhair, used in cough remedies, was made from the maidenhair fern, not a lock of hair from the closest maiden! Virgins honey was the first honey taken from a single comb, thought to be the purest honey.

The elixir of health, used for a range of ailments: rheumatism, gout, anaemia, to name a few, was thought to include: