Through careful characterisation, Catherine Jinks positions readers of Pagan’s Crusade to initially dislike the character of Joscelin, an old acquaintance of the protagonist, Pagan. Jinks’ use of flashbacks within a chronological narrative structure, give insight into Joscelin’s shady past and simultaneously implicates Pagan in events that have potential to compromise the readers’ initial admiration of the protagonist. Pagan’s Crusade is a dialogic novel. Mike Cadden argues that, “The dialogic or double-voiced text represents voices as equal and provides alternative interpretation that offer, in their aggregate, no single and final answer for the reader.” (Cadden, M., 2000, pp. 147). Jinks uses time shifts and creates in Pagan a first person unreliable narration, in which the reader discovers a level of comprehension for Joscelin’s situation and an awareness of how difficult life was in Jerusalem in 1187. In presenting a past association between Joscelin and Pagan, Jinks encourages readers to compare these two seemingly contrasting characters. As a result of Jinks’ strategies of double-voicedness, readers see both characters as well-rounded and human, making human decisions and errors; this in turn enables readers to identify with the characters, feel empathy for them, struggle with the same questions and feel as though they are making their own opinions of these characters. 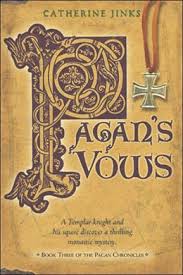 The use of anachronies, “time out of chronological order” (Bradford, C, 2011), creates a double-voicedness in which the reader is presented, through the course of the novel, with a more complex view of Joscelin than is first presented in chapter two, “Joscelin…A wolf in sheep’s clothing.” (Jinks, C. 2004, pp. 33-34.) Pagan’s Crusade is a chronological story that is intersected by kairos: points “in time which intersect with chronos and [are]…imbued with significance.” (Bradford, C. 2011). It is through the use of analepsis, “a narration of a story-event at a point in the text after later events have been told. The narration returns, as it were, to a past point in the story.” (Rimmon-Smith, 1983, pp. 46), that Joscelin’s situation is revealed. Joscelin is first depicted as a ‘maggot-bag’, ‘with a viper’s tongue’, a ‘Poisonous little scorpion’, a leech, ‘a thief, blackmailer, and notorious corrupter of women’, a ‘cut-purse’ and a ‘wasp’. The author presents Pagan’s opinion of Joscelin and this view is strengthened in a number of flashbacks. The first of these involving Joscelin informs readers, “Last time I saw him…Drunk, of course…Licking his sticky fingers with a viper’s tongue.” These flashbacks position the reader to detest Joscelin as much as Pagan does. The last flashback involving Joscelin is designed to give insight into Joscelin’s present situation and Pagan’s past, thus develop in readers a level of understanding about Joscelin that could, momentarily, become compassion. “Last time I crossed this threshold-when was it? On night watch. Cut throat in a private bath. Barber’s knife, stolen purse, nobody heard a thing. Perfect haunt for a snake like Joscelin. Should have known he’d end up living here.”

The view of Joscelin presented to readers is not an objective view, but that of Pagan himself through Pagan’s first person narration. The reader is positioned to accept Pagan’s opinion of Joscelin as this is the only perspective presented; in effect, it is a very one-sided, subjective view of Joscelin. The reader must rely on what Pagan decides to tell, to rely on his memory of events and his recollections, often made in times of great stress. Pagan, however, is presented as an unreliable narrator, allowing the reader, at times, to see flaws in Pagan’s logic that enable a possible different perspective of Joscelin to be hinted at. If Pagan is unreliable, then it follows that so too may be his representation of Joscelin. While the reader is initially positioned to view Pagan sympathetically, as a survivor of adversity, he is tarnished by his own past as he reveals, in bits and pieces, his previous association with Joscelin. Pagan’s desire to keep this past a secret casts aspersions of untrustworthiness over his ability to narrate the story objectively. “The question is, should I tell someone? …I should, of course. But it might be a bit awkward. It might cast a murky light on my own history.” (Jinks, K. 2004). The story itself is written with modern sensibilities though it takes place in 1187: it is a personal account that utilises many factual events, but that breaks from the ‘normal’ social behavior of the time. For example, historically, no one would have questioned the Crusades and the Order, but Pagan speaks openly and questioningly throughout the book. This self-reflective examination is a more modern trait used by the author to allow the reader to form their own judgments as they too are invited to wrestle with the same ideological questions as Pagan and inviting them to consider Joscelin’s actions in a new light. The effect on the reader is to view these apparent enemies as quite similar through the unreliable narration that enables readers to question the events presented.

The character of Joscelin is created in a particular place and that place contributes to his character identity. “No text is exempt from history…a culture’s texts are, in fact, produced from within that culture, and determined to a large extent by its history.” (James, K., 2000). Jerusalem of 1187 is a hot and dusty place, described as “dangerous”, full of “brigands” who “are just hungry peasants who throw stones” or who “follow caravans like wolves, preying on stranglers”; night patrol there is “your worst nightmare. Either you’re picking [pilgrims] corpses off scrap heaps (robbed ad murdered0 or hauling them out of the gutter (penniless and dead drunk).” (Jinks, K. 2004), and Joscelin is a product of this environment, he is created out of this environment and, from it, he learns certain values and survival skills. Pierre Bourdieu describes habitus as “a set of dispositions created by the combination of social structures and personal history, and shaping the way we behave.” (Bradford, C. 2011, pp. 6). The descriptions of Jerusalem and the society therein are fundamental to readers’ understanding of how such a character as Joscelin could come to exist and, therefore, enable the reader some level of compassion toward his situation. However, juxtaposed with this is the character of Pagan who comes from an equally dubious background yet still manages to retain a level of morality that appears absent in Joscelin. While Joscelin is motivated by his own self-interest, “I barely have enough to pay my own ransom…”, Pagan is motivated by selfless care of others, “Lord Roland is my master, and he won’t let the Order pay his ransom…I’d pay the money myself, but I’ve got nothing, nothing, not even my own clothes-” (Jinks, K. 2004).

The ending of the novel sheds more doubt on Pagan’s character as he is shown in similar light as Joscelin. This is particularly the case when Pagan goes to the Mount Sion bathhouse to demand money from Joscelin. His lack of compassion and level of aggression towards Joscelin, positions the reader to feel more compassion for Joscelin’s plight. With “a handful of hair…Pulling his head back…Dragging harder, until the tears well up in those oily orbs.” Pagan tells Joscelin, “Money. I want money.” Pagan fails to display any compassion, even in the face of Joscelin’s obvious deprivation. “He’s wobbling about on all fours like a newborn lamb, dazed and disheveled…What a miserable creature.” (Jinks, K. 2004). The reader is positioned to feel compassion towards Joscelin and horror at Pagan’s actions and to question Pagan’s moral standing. The result for the reader, is that these two characters, who seemed so different at the beginning of the book, appear not so dissimilar at the end. Finally, Pagan meets Saladin, the ultimate enemy, and further shadows are cast over Pagan’s past as it is hinted at that he may be an infidel, something that is potentially far worse than being similar to Joscelin, when Saladin tells Pagan, “You remind me of someone…” (Jinks, K. 2004). Jinks positions readers to break down barriers between apparently oppositional characters and to see humanity in monstrosity.

Jinks carefully leads readers to conclude that people, no matter how seemingly horrible at first glance, have in common their humanity, and that they share many similarities despite their particular ideologies, religions or morality. By creating a double-voicedness within the novel through the use of flashbacks, an unreliable narrator and characters reflective of their environmental circumstance, Jinks subtly positions readers to make a distinction between Joscelin’s selfish motivations and Pagan’s often rash and immature, but well meaning, behaviour. Jinks encourages readers to view all characters as humans, deserving of understanding, showing readers how narrow the difference and close the similarities between supposed opposites. In doing so, she breaks down ideas of duality and the concept of ‘enemy’ and positions readers to view greater levels of complexity in all situations.