This month has been massive! I learnt about accepting resistance, but prior to that, my resolve to be happy and grateful was well and truly tested. Two things were what helped me through tough times. 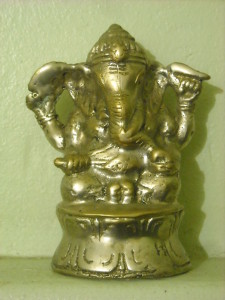 What began as a great month, took a tumble when there were health issues in my family and one long night in a hospital emergency room, sitting bedside, trying to get comfortable and get a little sleep. This was followed by a few weeks of stressful medical tests (until the all clear was given) and me putting my back out…thanks to the almost yogic-like poses I got into trying to sleep in that hospital chair!

The uncertain health of a family member and the pain of my back was enough to send me into a slump. And boy, did I take a dive! I was demotivated and unproductive and really, really struggling. I stopped doing all the things I know work for me: I stopped doing yoga, I ate poorly, I stayed up late. I beat myself up about my failure to pull myself out of my funk, which of course made things worse. But I kept writing in my journal, I kept acknowledging the things I was grateful for, and so I became aware of all of this happening. And here is where the breakthrough began…

I saw that I see things as having gone ‘wrong’ when they don’t reach my expectations or go as I had planned or hoped. I noticed how anxious I feel about being apathetic. It’s like I see my days as numbered and I feel my mortality as pressure to achieve, so when I am dispirited and immobile, I feel like I have lost opportunities to really live…and these are chances that I will never retrieve. Yeah, it’s pretty depressing right! This spotlight on my mortality and failure to fully live these moments, flashed up as failure for me, and brought up all of my worst negative self-talk: ‘Not good enough!’ I saw how easy it was to take these dives, but how hard it felt to step off this awful merry-go-round and step back into the light. I knew the longer I resisted, the harder life felt. Now wonder I crashed so badly!

To give you an idea of just how far I plummeted, I even wondered if I should give up writing! Ok, so this was the briefest of moments, but writing to me is like breathing…a pretty big deal! Writing is for me, in part, how I make sense of the world and myself, so when things are confusing, writing becomes pivotal to working things out. And in the face of feeling so negative, writing down the things I was grateful for each day became the light I worked toward.

Added to this was another blow, Terry Pratchett, one of my favourite fiction authors, died. Now here was a man who lived a BIG life and achieved so much. In fact, he even helped his readers come to terms with his impending demise before it happened…by talking about his illness, by writing about death…and Death…and through the humour, wit and genius of his words. I felt sad, but I also felt that things were as they should be. His parting left me with a sense of continuity…like wherever he is, (and after a quick chat with Death), he continues, just as he continues to inspire us though the fabulous creations he left us.

I saw that sticking with the enquiry of life was paramount. And probing these dark spaces is all part of that. It is in these not so pleasant states that we see where we want to bring change. And it is from here that I started to actively practice choosing happiness and being happy in the face of other emotions. I began rehearsing how happiness might feel in any given circumstance…and I worked especially hard at these situations I didn’t really want to be in. And guess what? I discovered new levels of compassion for others and myself. I chose to see love around me and chose to interpret the actions of others as coming from a place of love. I learnt to ask for help and be humble enough to receive it.

I came across this fabulous quote: “Your resistance is a sign that your system is reconfiguring itself.” And suddenly, my resistance felt like part of the journey rather than a roadblock. I learnt to be more accepting of resistance as part of my path…and lo and behold, as I became more accepting of the resistance, it was gone! Instead of interpreting things as failure, I could see where I had achieved, despite the stressful circumstances, and I came to see small things as miracles: a beating heart, a breath taken, a warm hug, a smile, the sound of laughter.

At the start of March, I had put it out there that I wanted to live fully and bravely. Who knew that this would mean having the courage to face my own shadows and to accept them, lovingly, as positive aspects of who I am?

Now, at the start of April, I am declaring that I want to inspire and feel inspired. Let’s see what this opens up for me and how far I can take it.