A book review of Lips Touch by Laini Taylor. 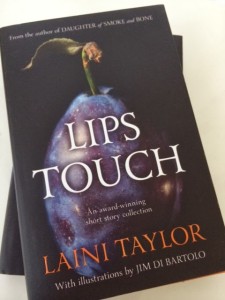 First published in America in 2009, I didn’t pick it up until early 2014 – and then I read the UK Kindle edition (published in 2013). I was editing my own fantasy fiction at the time and wanted to read something in a similar genre to keep me inspired in my work. ‘Lips Touch’ is a gem that I didn’t want to end. I had already read Laini Taylor’s ‘Daughter of Smoke and Bone’, so had some knowledge of her writing.

‘Lips Touch’ is a collection of three long stories: Goblin Fruit, Spicy Little Curses, and Hatchling. All of these stories are a pleasure to read, like a dance in a fairy tale world, they are written with such innocence but carry heavy burdens: of waiting, of desire, of longing. Freedom, love, life and death – these themes are all tackled beautifully in the fantasy worlds Taylor and illustrator, Di Bartolo, have created.

On her website, Taylor writes, “These stories have an interesting origin, for me, because they were written in the days after my first novel, Blackbringer, had been sold (some time in 2006, maybe?), and while I was undergoing the early phases of the publishing process for the first time. I was a skinful of excitement and dread, and though I *should* have been making a start on my next novel, Silksinger, which was already under contract, I … couldn’t. I didn’t have editorial notes yet, I was filled with uncertainty. And I’d been working on that first novel for so long, what my brain really needed to do was play.”

I found the construction of these stories so fascinating. Having just finished writing my own work in progress, I could totally understand Taylor’s need to simply play with words and write some quicker, shorter pieces. I was also intrigued by the illustrations which appear at the beginning of each story. These illustrations were drawn by Taylor’s husband, Jim Di Bartolo, and tell the pre-story, acting as an introduction to the written stories themselves. The three stories share the idea that just one kiss can have life altering consequences – a concept that we are all familiar with to some degree or another from our own lives.

What if a kiss is not just a kiss, but holds the power of life and death? What if you can lose yourself in a kiss or if more is shared than simply saliva and emotion?

Goblin Fruit was inspired by ‘Goblin Market’, a poem by Christina Rossetti, which you can read on the Poetry Foundation’s website. It wasn’t until after I had read Taylor’s story that I sought out Rossetti’s poem, and reading it I can see the connections: the cautionary tale for girls to stay away from the goblin fruit. This is the story of Kizzy, a teenage girl who is different from most girls and full of desire – a desire that brings her to the attention of the goblins and ends with a kiss. You can watch Taylor reading from this story on YouTube.

Spicy Little Curses carries with it a sense of duality: life/death, underworld/the world, human/demon, male/female, and compassion/cruelty. This is the story of Estella, an old woman whose sole desire is to save children from death and the clutches of a demon. But it is also the story of Anamique, cursed as a baby to a life of silence who is filled with longing and love. A kiss here signifies the end of one journey and the beginning of another.

Hatchling is the story of Mab and her daughter, Esmé, living a transient and secluded life in London as a consequence of a kiss in another world which Mab thought she had escaped years ago, but that now threatens their existence.