Introducing conflict and tension into your writing doesn’t have to mean guns and fights or anything that overly dramatic. Tension can seethe just below the surface, brewing but contained. Whatever form your conflict comes in, it is imperative to your plot that there is conflict. Conflict brings change; change brings conflict – both are important to keep your story moving, to trigger the events that form your plot. Louise Doughty says, “A plot is about things happening. It is about change, drama, conflict.”

This is not a revelation, I mean, change and tension occur every day in our own lives. Take this morning, for instance. I went into my child’s room to say good morning. A quick knock on the door. “Good morning!” I said as I walked into the darkened room. There he was, all snuggled under his blankets. Nothing new here, no change, no tension…then… “Boo!”

He had stuffed his bed with pillows 15 minutes earlier when he heard me get up, and had hidden just out of sight, waiting. Talk about tension! Apparently I jumped and whimpered…and he laughed and laughed.

Now I know this is not going to make the central idea of a plot any day soon, but it does show you that tension, change, surprise and conflict are everyday occurrences – you needn’t be afraid of introducing these elements into your own writing, you are already very familiar with them. 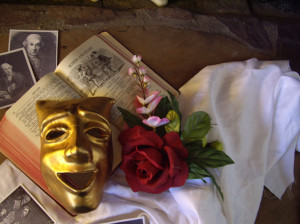 Imagine an awkward situation you have found yourself in. Write it down in as few words as possible. Write a situation in which one of your characters has to confess something. Now combine these two things as a dialogue between two of your characters: (the confessor and whoever they are confessing to) beginning with: “You’ll never guess what happened…”

Awkward situation: I was at a crowded bus stop with a boyfriend. I reached my arm around his waist. When I leant in for a hug, I realised it was not my boyfriend, but another commuter waiting for the bus.

Confessional situation: Annabella is in the crowded marketplace with Zikmund. She reaches her arm around his waist and leans in for hug only to realise that it is Gorg she is hugging not Zikmund. Gorg seems surprised, but leans in and returns the hug. Several moments pass before Annabella pulls away. She is shaken as she realises how much she enjoyed the hug.

Dialogue: “Eufrosina, you’ll never guess what happened in the marketplace this morning.” “What? Annabella, you’re all pale. What happened? Are you ok?”

“I thought you and Zikmund…”

“I didn’t mean to hug him. I thought he was Zikmund. I wasn’t looking’”

“Clearly. How could you possible think he was Zikmund?”

“I just reached out to hug him and before I realised it was Gorg, I was already kind of in the hug.”

“I wouldn’t worry, I bet he was more embarrassed than you.”

“Well, here’s the thing…he kind of hugged me back…and I sort of liked it.”

Ok – so this is enough to give you an idea of what I mean. I have only included the dialogue here for ease, but this could be developed further to include location and action. I also think it would be good to build some humour into this little scene, but for a quick piece of impromptu writing, it is a good starting point from which something might grow.

Give it a go yourself and feel free to leave me your response.

Photo credit: Face in the Shadow