Another Louise Doughty inspired piece of writing about being lost, physically and metaphorically. It is based on an incident in my life, but overly exaggerated. Actually, reading it back I really dislike the writing I have done (perhaps because most of my writing is in 1st person and this is in 3rd person – but this was intentional, to replicate the distance the character feels from those around her and from herself). However, the purpose of this blog is not to publish only highly edited and re-worked posts, but to give you a sense of ‘writing in process’ over the course of writing my novel…and it is my hope that seeing my less than brilliant writing will also inspire you to have a go at writing yourself.

Here is my piece on being lost: 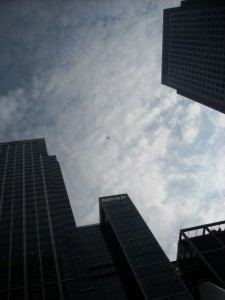 She was so elated to be in London. She had never lived abroad before as an adult and this felt like a new chapter in her life. It was a release from her previous life, it was cathartic. Even though she had been born here years before, she felt like a foreigner, everything was new, strange, other. She was excited at the prospect of exploration and set off early, bravely. She thought she would head into Canary Wharf and meander through the subterranean arcades of the great mall there. The shining treasures of lights enticed her. Afterwards, she would make her way to the Docklands Museum to balance the new with the old and to connect with the past, perhaps looking for a relic of herself.

She found the mall easily, every above ground entry, it seemed, lead to its glittering caverns. And for the first hour the pulse of the mall swept her away like a river. She was distracted from herself, from her loneliness, from her isolation from those around her and those close to her but miles away. But she was too thoughtful to be caught by the glitz for prolonged periods and soon the mall bored her, with its corporate executives, its consumerism, its busy-ness.

She raised her eyes, averted her gaze from the shop windows and realised she had no idea where she was, the mall was so vast. She tried to retrace her steps, but she had not been paying attention; a rooky mistake.

That’ ok, she thought, I’m an intelligent rational woman, I’ll consult the map.

For all her map reading skills, for all the years teaching mapping to secondary students, for all the country hikes ad urban adventures, she couldn’t for the life of her work out the mall map that was designed to keep people in.

The artificial lights masked day and night and made her ache for the sun and blue sky of sandy beaches. The heated warmth made her hot and nauseous; she yearned for a breeze that smelt of the bush after rain.

She looked around her for help, but the straight-jacketed somber-toned suits were too quick for her in their rushing to and fro, their sleep lacking eyes distant and lifeless, thinly masking agitation close to exploding. She shrunk from them, from herself. No longer the brave explorer, she felt the timid, desperation of a mother avoiding an empty nest, too self-conscious for human contact. She panicked, her pulse raced, her palms were sweaty.

When she finally found an exit, she paid no attention to where it took her. She stood, topside, on a strange street, breathing exhaust fumes and fetid air, gazing up between skyscrapers at the distant grey sky.

2 thoughts on “Writing from what you know”