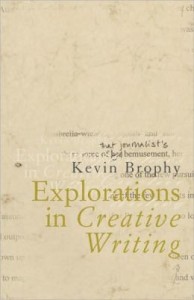 I have just read ‘Night writing: a reading of Kafka’s ‘Metamorphosis’’ by Kevin Brophy. In many ways I enjoyed Brophy’s discussion of the story more than the story itself: he suggests that writers need to immerse themselves completely in their stories, to explore meaning rather than to impose meaning, he says that stories make themselves known to a writer and demand to be written.

I walked out of my class ready to cry, disheartened by the students’ complete lack of interest. All my preparation, passion and effort failed to move them. They resisted and complained and I felt worn down and weary. ‘I love my job,’ I tried to remind myself. ‘They’re all nice kids,’ I offer as an antidote to the superlatives forming on my tongue. Then I come home to my own child. He follows me into the kitchen and talks at me like a happy puppy, telling me all about his day while I cook dinner…and I remember what makes it all worthwhile.

And when I sit to write, to draw out of myself all that has occurred to me, all that I have heard, all that I have imagined – the alternate lives and confusing circumstances – all the frustrations come pouring out: in bits, in floods. Sometimes it is non-sensical, sometimes thought is faster than I can write: all the ugliness and beauty.

I struggle to make connections: to difficult a teenage audience under challenging circumstances, to the unknown reader of my writing; trying to find some greater and shared understanding. It is as though there are two writers: one trying to make sense of things, the other trying to convey meaning. It seems that both doubt themselves as much as they are driven and confident – a strange and fragile duality.

This never ceasing compulsion to lay down words, even when they are tedious – I tell my students that sometimes to get to the gold they have to write out the rubbish that gets in the way – some days all I write is rubbish, and it clings to my ankles and slows my pace, but I know if I keep going, I will walk out of it into some brighter space. The only way through it is to write it out. (Kafka reflects something similar: “There are times when the placing down of the words one after another is like laying bricks to build the dullest of walls. The job must be done if the architecture of the vision is to be realised in the end.”)

This drive to write dogs me, I can’t escape it. Snippets and lines form at most inopportune moments when there is no paper or pen, and to my eternal frustration are lost. I write on anything I can get my hands on – lipstick on napkin.

“It was a bodily absorption, an addiction, a kind of lust. I had no choice.” writes Lisa Moore (2006) and the feeling is familiar to mine.

I wonder what part the ego plays in all of this, how much I have emotionally invested in it all, how much it matters.

Here is one snippet, written after travelling to Northern Ireland, but about local and global conflicts more generally:

As well as reading and writing, I think it is important for a writer to be reflective of their own writing. When writing the above snippet, the overwhelming emotion was of feeling uneducated. I have an opinion that is based on some sort of moral compass of right and wrong, but it is not supported by evidence and facts, I feel that this somehow invalidates my opinion. But, in this writing I was liberated…I didn’t have to be educated to put forward my feelings, I didn’t need to write a factual thesis about the state of the world. You can speak up, you have a right to be heard, even if you know very little.

Here, I didn’t want to write important sounding words…I wanted to write everyday words that had some impact and were real and meaningful. I wanted to express hypocrisy: within our culture, our government and our own selves, and to consider one individual’s part in this and their ability to be the catalyst for change.

What is writing for you?

Moore, L 2006, ‘Getting Away with It’, in The Penguin Book of Contemporary Canadian Women’s Short Stories, Penguin, Canada, pp. xi.